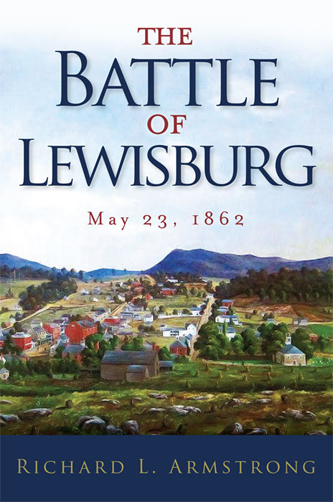 The early morning hours of May 23, 1862 brought the horror of war to the residents of the small, mountain town of Lewisburg, Virginia (now West Virginia). A brigade of Union troops, commanded by Colonel George Crook, had occupied the heavily Confederate leaning town less than two weeks earlier. Now, Lewisburg felt the fury of a battle waged in her streets. Bullets flew in every direction. Cannon balls whistled overhead and occasionally struck the homes and other buildings of the town. Confederate soldiers, some of whom grew up in Lewisburg, fought and died in their hometown.

A few hours later, 240 Confederates were killed, wounded, or taken prisoner. The victorious Union troops suffered the loss of 93 men killed, wounded, and captured. Confederate Brigadier General Henry Heth, with a superior force, now found himself forced to retreat in complete disarray. Colonel George Crook would soon be promoted to brigadier general, largely because of his conduct at Lewisburg.

This carefully researched book by historian and author Richard L. Armstrong contains 248 pages, 34 images, and 13 maps (including a detailed map of the town the day after the battle by Captain Hiram F. Devol of the 36th Ohio Infantry). The cover features the beautiful painting of Lewisburg in the 1850s by renowned landscape artist Edward Beyer.

Lewisburg, now a part of the state of West Virginia, is the county seat of Greenbrier County, and is named for Revolutionary War period General Andrew Lewis. A previous winner of the “Coolest Small Towns in America” award, the town offers many quaint shops, restaurants, galleries, and other attractions. Walking tour brochures, including one focused on the Battle of Lewisburg, are available at the Greenbrier Valley Visitors Center, located downtown on the corner of Washington and Court Streets. 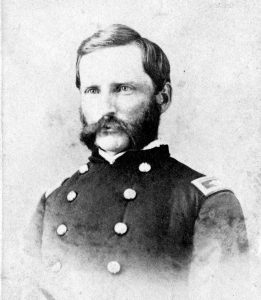 Download the hand-drawn map made by Captain Hiram F. Devol, 36th Ohio Infantry, the day after the Battle of Lewisburg [pdf]

“In all, this book is a model micro-history of a forgotten Civil War battle.”
Robert Grandchamp Book Reviewer, The Civil War News, November 2018

It has been said that the Civil War was fought in 10,000 places from the coast of France to St.Albans, Vermont, from the Caribbean to the far West. Indeed, many of the military engagements that took place during the Civil War will never reach the history books. One of those engagements was the battle of Lewisburg, West Virginia, fought in the Kanawha Valley on May 23, 1862.

The battle of Lewisburg occurred as a result of maneuvering by several Union forces in western Virginia in the spring of 1862. Although often overshadowed by Jackson’s Valley Campaign, these forces worked in coordination to secure western Virginia for the Union. Moving his forces through the Kanawha Valley, Brig. Gen. Jacob D. Cox hoped to link up with a larger force under John C. Fremont near Princeton, Virginia. One of Cox’s brigades, however, under George Crook was sent towards Lewisburg. There on May 23, 1862, they were attacked by 2,200 Confederates under General Henry Heth. Crook and his brigade held their ground, sustaining eighty casualties, while inflicting over 200 casualties on the Rebels; the battle only lasted twenty-seven minutes. It was a decisive Union victory, but was overshadowed by Union losses in Jackson’s Valley Campaign.

In this book, Richard L. Armstrong has done a fantastic job of creating a micro-history of the engagement. It is evident that Armstrong knows West Virginia history and the history of the Lewisburg area. He begins with laying out the context of the campaign and its place in history. Many detailed maps highlight the approach of the armies to Lewisburg and how the battle unfolded. The maps are a very important part of the text and are some of the best this reviewer has ever seen. In addition, many illustrations of the participants in the fight at Lewisburg highlight the text. Furthermore, Armstrong has conducted significant research into the lives of the men who fought there, providing details of both Union and Confederate casualties, and photographs of them. A detailed battlefield tour guide concludes the text. The book was researched almost entirely from primary sources, and many manuscript sources grace Armstrong’s bibliography.

In all, this book is a model micro-history of a forgotten Civil War battle. Armstrong has done a highly commendable job of writing a detailed history of the battle of Lewisburg. The book is detailed, richly researched, and informative. The superb maps and detailed biographies of battle casualties add to the importance of this work. This book is highly recommended for those wanting to read about the importance of West Virginia to the Union cause, or those wanting to read a model battle history.

Being a big Civil War Buff with large Civil War Library I often hear reviewers of Civil War Books claiming that a particular book is “the definitive” book on the battle of Gettysburg, Antietam, the Franklin Campaign, etc. Which is why when a historian or author writes a book – particularly a good book – on a campaign or battle where no study existed at all previously let alone a definitive study I am particularly thrilled.

The author’s treatment of the battle is a strategical and tactical study of the battle that is the kind usually reserved for larger campaigns and battles. The book has multiple maps making it easy to follow the flow of the approach to Lewsiburg, the battle, and retreat. Many illustrations and an extensive bibliography with many manuscripts and primary sources are included. Also covered are sections on the caring for the casualties of battle, tables and listings of the casualties and losses from the battle, civilian observations of the battle, and a chapter on a veterans reunion of the battle in 1904. There are also 6 Appendixes on Period Maps of the battle, the Confederate and Union Cemeteries, Heth’s Artillery strength and visiting Lewisburg. His book on the Battle of McDowell is also highly readable and again an excellent example of a strategical and tactical study of a relatively smaller battle.

Jackson’s Valley campaign is covered reasonably well in Civil War literature, but the supporting campaigns of Crook, Cox and Garfield through the Mountains of West Virginia aren’t covered nearly as well. Probably because of the smaller number of troops involved, the difficulty of the terrain, and the focus on Jackson’s more acclaimed battles in the Shenandoah Valley.

I highly recommend this book to anyone looking to get a better understanding of Crook’s columns victory over Heth and his column’s effort as part of the overall Virginia and West Virginia Valley Campaigns of 1862.

Richard L. Armstrong is a native of Millboro, Bath County, Virginia, and a veteran of the U.S. Air Force.  He served in the Presidential Honor Guard in Washington, D.C., and as a security policeman at Reese AFB, in Lubbock, Texas. He is retired from the Bath County Sheriff’s Office with 33 years service. He is currently the president of the Bath County Historical Society.

Mr. Armstrong published his first book on the Civil War in 1986, and is the author of fourteen books and journal articles, including The Battle of McDowell, The Battle of Bulltown, and several books in the Virginia Regimental History series. The Battle of Lewisburg is his latest title.  He is a frequent lecturer for historical societies, genealogical societies, veterans’ groups, and others.